I'm Not Here for the Glamour

Last week of January! It's Always so nice when January is almost over. It was not my most favorite week, as I don't feel like we really accomplished much because so many of our appointments fell through, but we still saw some pretty neat things.

Updates of the People:
L.-Still haven't found her. Been on a scavenger hunt that just leads from one place to the next.
J.-Didn't get her to church, only had one lesson, hopefully this week we can solidify her understanding of some commandments
E.-She wants to be baptized! But church is too early (haha the plight of our mission)
T.-Our miracle of the week! She basically just handed her soul to us. She sat next to us while we waited for a train, mentioned the biting cold, and we began talking about the weather. (ha it works!) Somehow, that gracefully led into an intense gospel discussion that lasted through the entire train ride! She is a beautiful person, and when we got to the station, she gave us her information and said we could come by next Tuesday to talk some more. Woo hoo! Sister Goodman and I just happy laughed for the rest of the night.
M. (and daughter)-We were supposed to have an appointment, but she forgot and we caught her on her way out. She told us to go on in and chat with her daughter a bit, so we did, and long enough so that M. came back. Guess what. We think she was actually baptized 40 years ago! Where has this woman been hiding!? So we have another appointment this week, and her 28-year old daughter said she's going listen in as well. Yay people!

I don't think I've ever smelled so much like smoke as I have this week. But someone (general authority?) once said that he wished that the entire sacrament meeting smelled like smoke, because that means there are sinners in church who are making a change. So I can tolerate a little smoke smell on my coat if that means that someone is coming closer to Christ.
Another realization this week, as I was reading PMG, it tells us that all God asks of us missionaries is that we "ask, seek, and knock." This is of course figuratively, referring to the numerous times in the scriptures that we are instructed to do these things, but as a missionary, how literal this is too! All we do is ask people to come to Christ, we seek them out, and we actually knock on their doors. We are dressed in such a way that we don't stand out in the fashion world, we live humbly with only what is absolutely necessary, and we spend all our time trying (oh we are not perfect at this) to help other people. We are literally representing Christ. We are trying to do His work the way that He would; it's not glamorous or cool, it's very simple and humble. That's why missionaries have to be pure and clean before they come. You can't represent Christ if you can't emmanate His spirit.

Anyway, thoughts from a third-transfer missionary. :) Hope all is well with you, and that the spirit is strong in your lives.

Much love from Nederland, 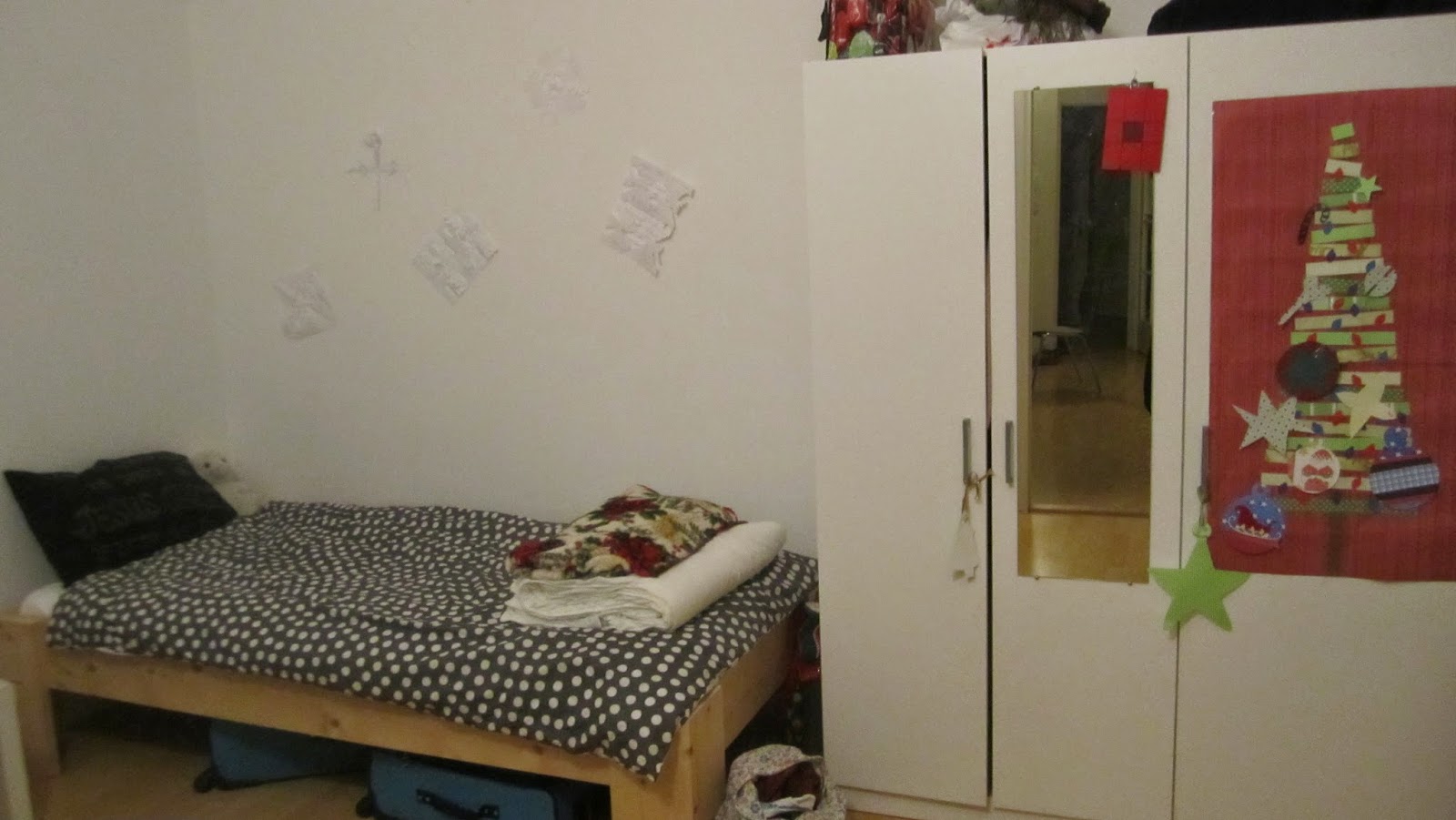 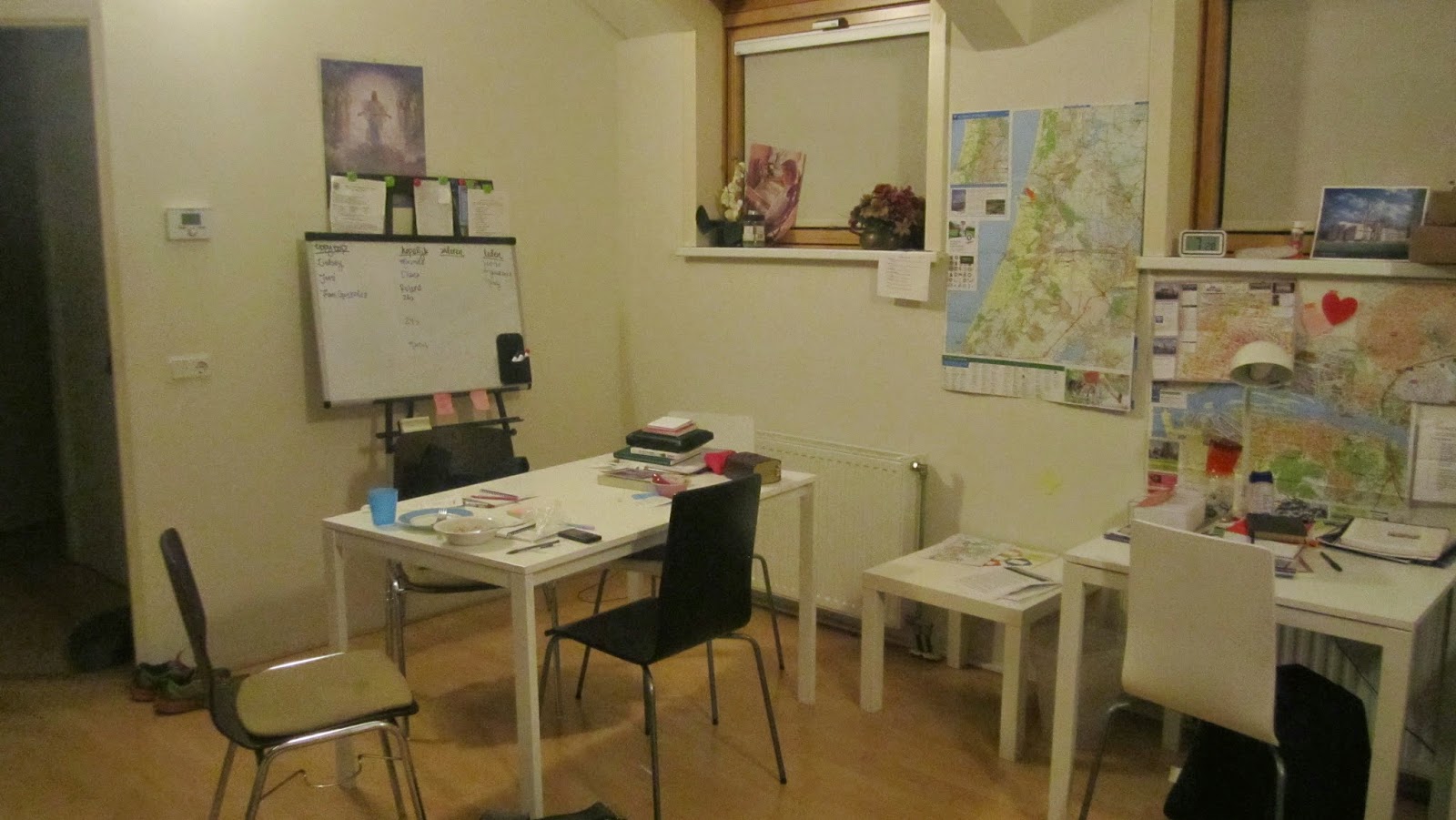 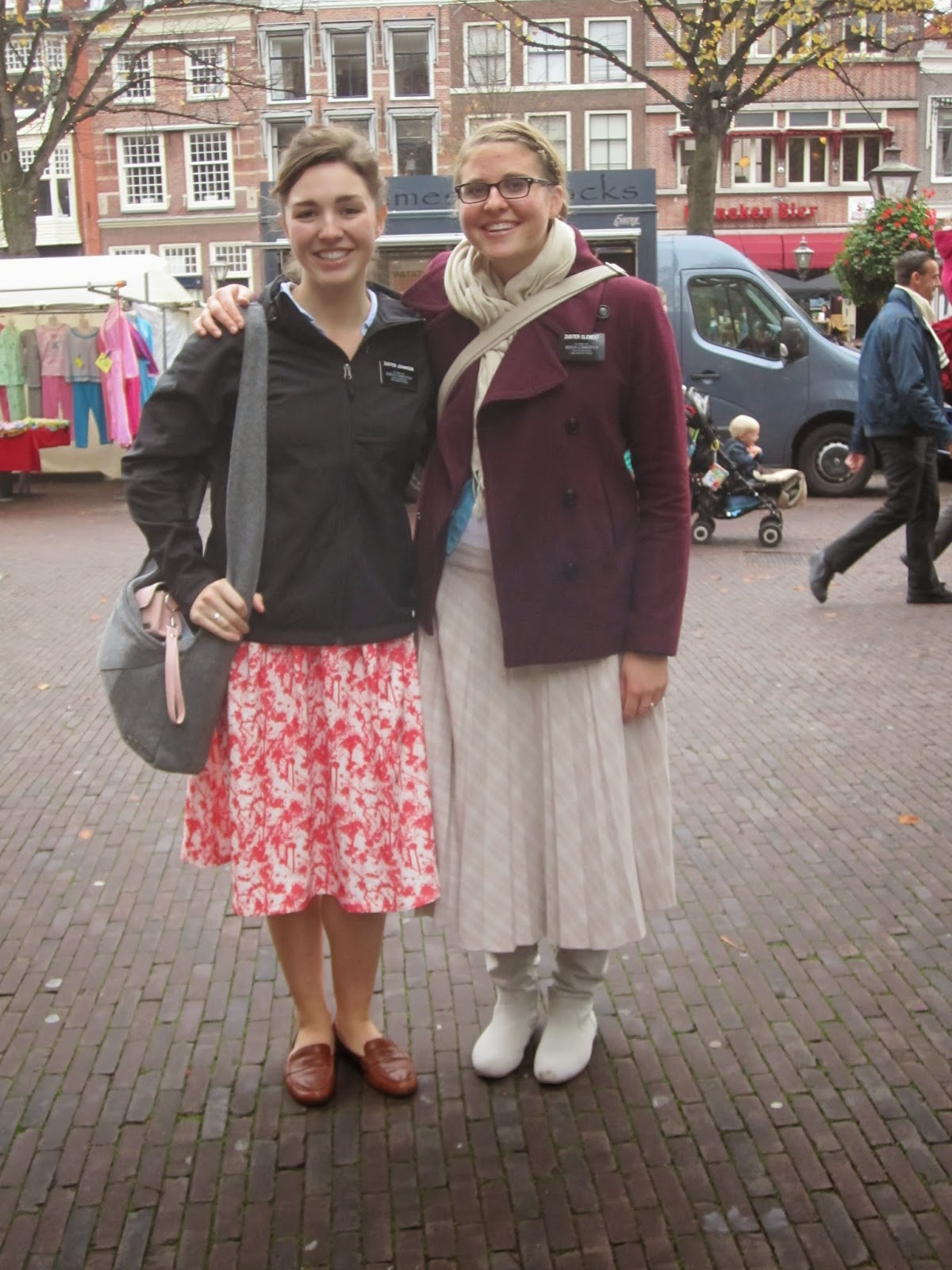 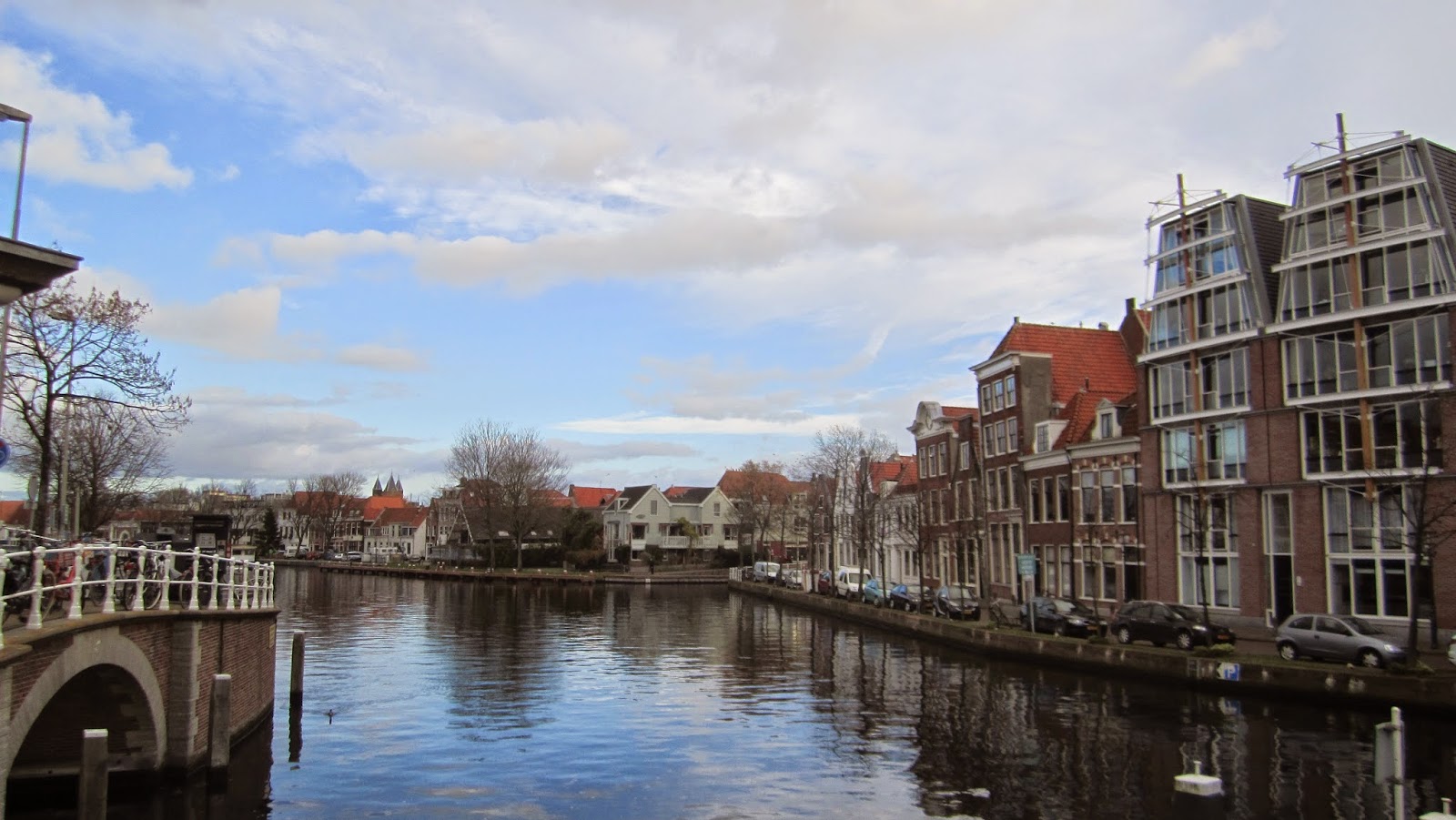 Sister Clement and I on my first day 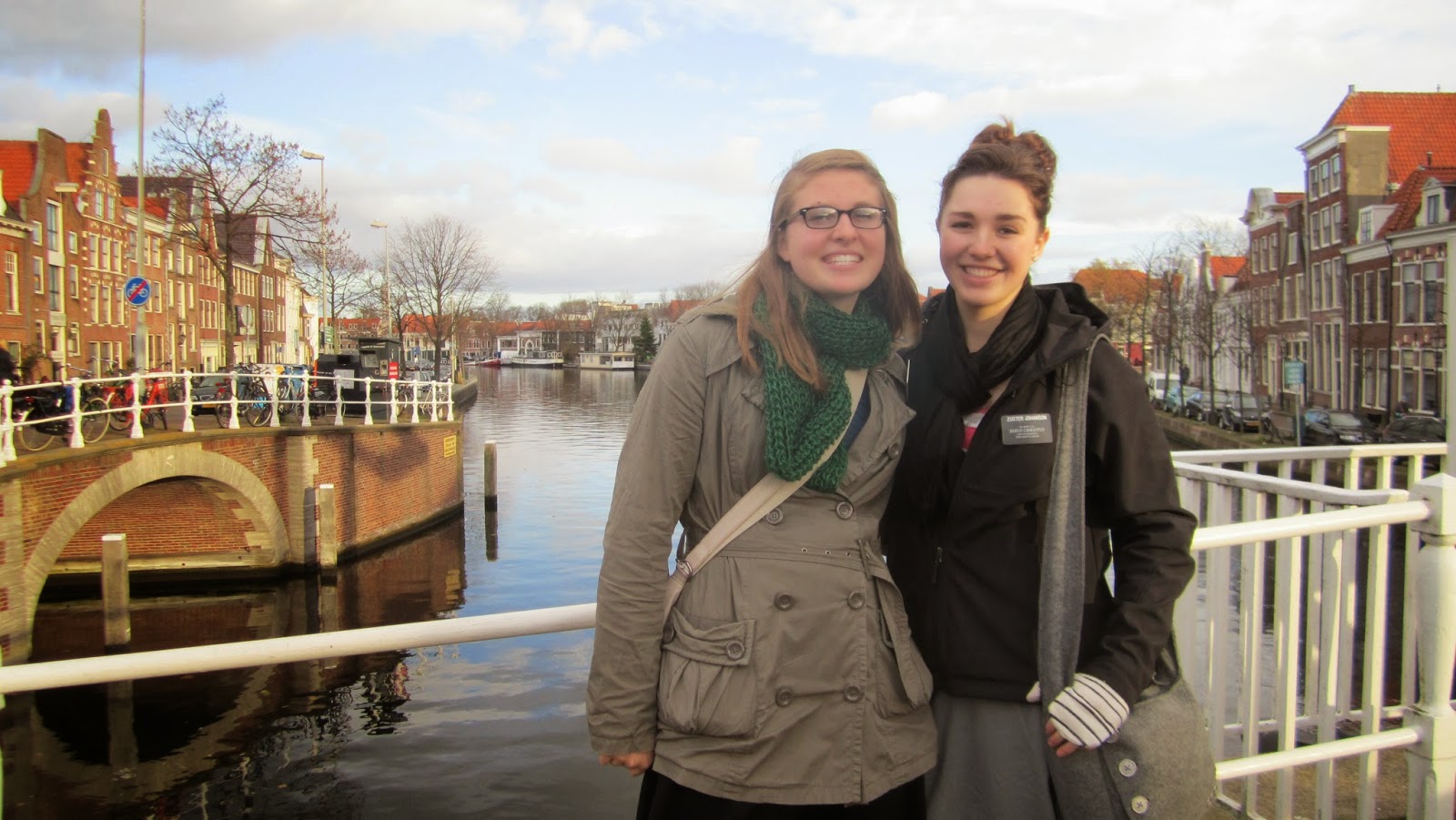 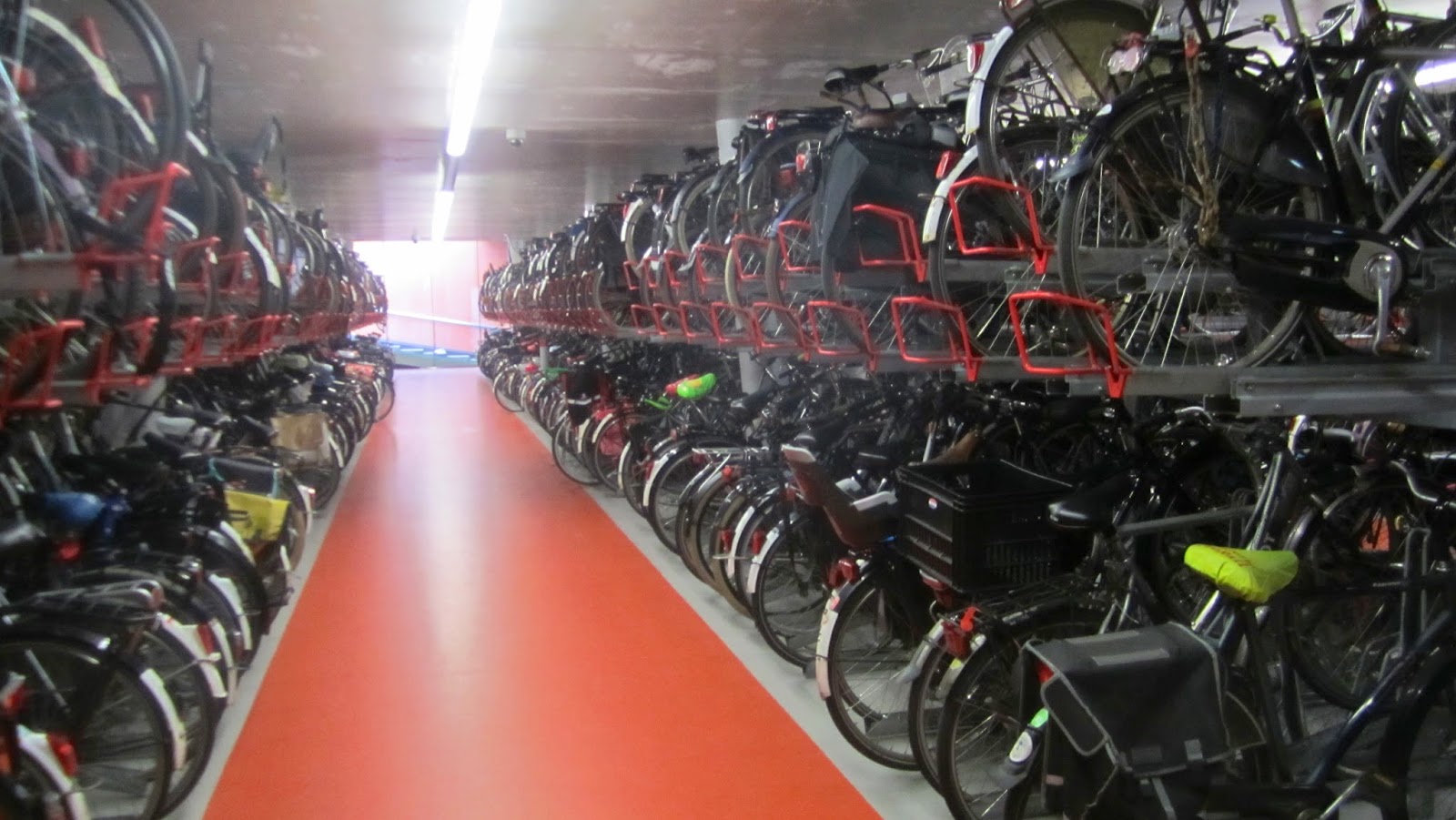 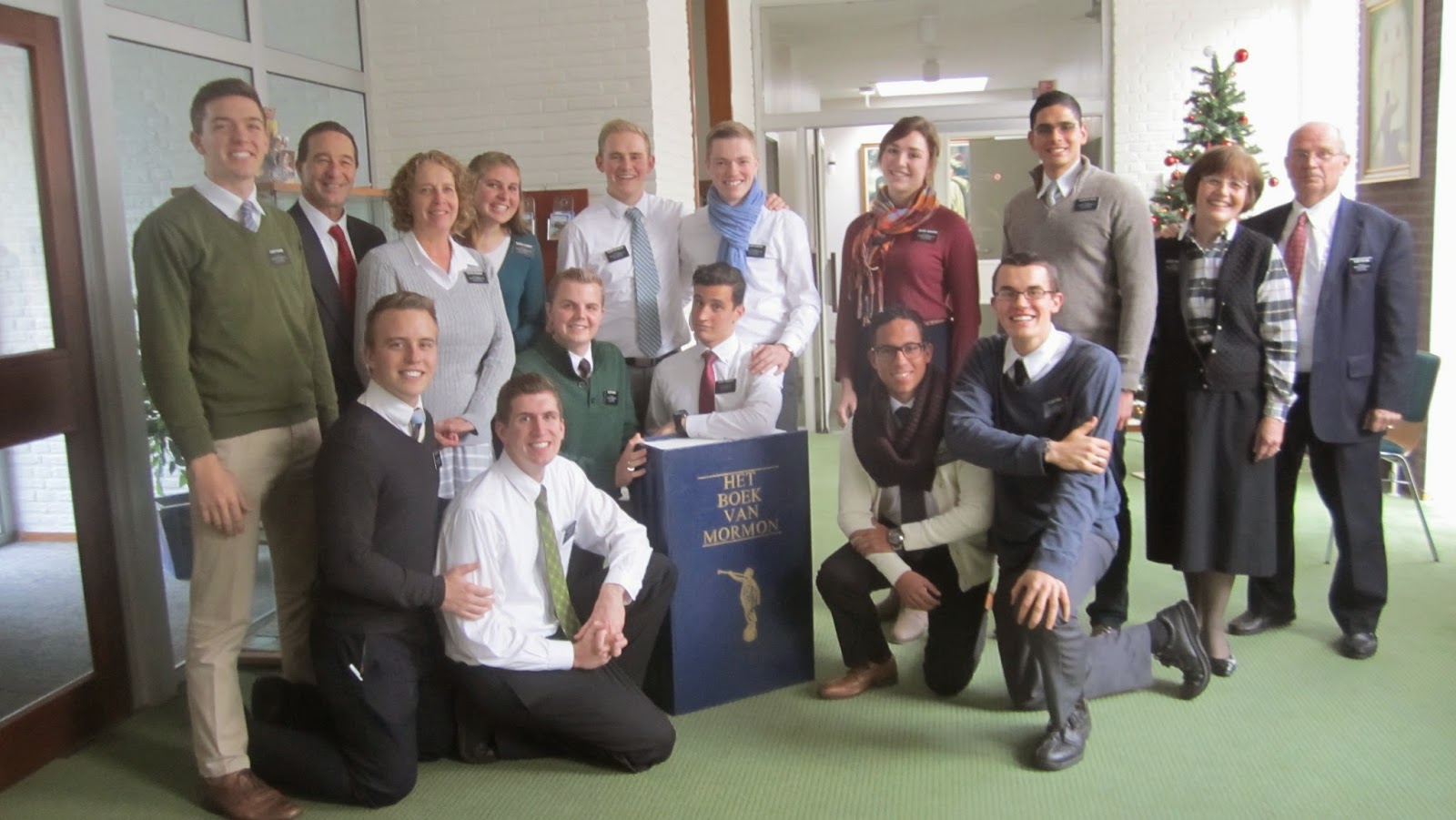 And suddenly, there are actually things to tell.
After an entire transfer of knocking doors and having 1 1/2 investigators which weren't even in our city, things are finally happening in IJmuiden!

We met this woman, Gerde, while knocking doors a couple weeks back, and this week, we taught her and her husband the first lesson. They are great investigators, and super interested in The Book of Mormon and what we believe. Her husband, Richard, is incredibly smart and has studied religion extensively. He actually started telling us about the great apostasy and translation of the bible! They are busy and hard to make appointments with, but we plan to keep working with them, and hopefully their three teenagers as well. Baptizin families, oh ya.

Frank is our miracle referral. One day, we knocked out a couple Streets, and left with little "success." The following p-day, I got an email from the AP's, which was a forward of an email from this young man Frank. He said that two young women had knocked on his door, and he had sent them away, but thinking about it later, he wondered what they could offer him and was interested in learning more. Holy cats! When we went to look him up, we did not even recognize him. He told us that he hadn't even accepted a card, he had just sent us away. Then he asked if there was something he could read to learn more or something, so wham, we whipped a BVM and made an appointment with him this week! Who knew that knocking doors actually works? Even with the grumpy ones! :D

Lindsey no longer lives with Jenny, and that is tragic, and we have no contact with her. I am determined to find her this week. She can not get lost.
However, now Jenny is much more responsive and happy and so we are hoping to seriously start teaching her. We will see how that goes this week.

Transfers came and went and I'm still in IJmuiden with Sister Goodman. Luckily, we really like each other and it's not even raining today, so we like IJmuiden pretty well too. I can't even imagine what's in store for this transfer, but I guess I have hopeful anticipation and will just work on my patience a bit.

Hope January is treating you all well! January Always seemed so long and tiresome and you just try to stay motivated and get through winter. Hang in there, it's almost February.

Love and peace from the Netherlands, 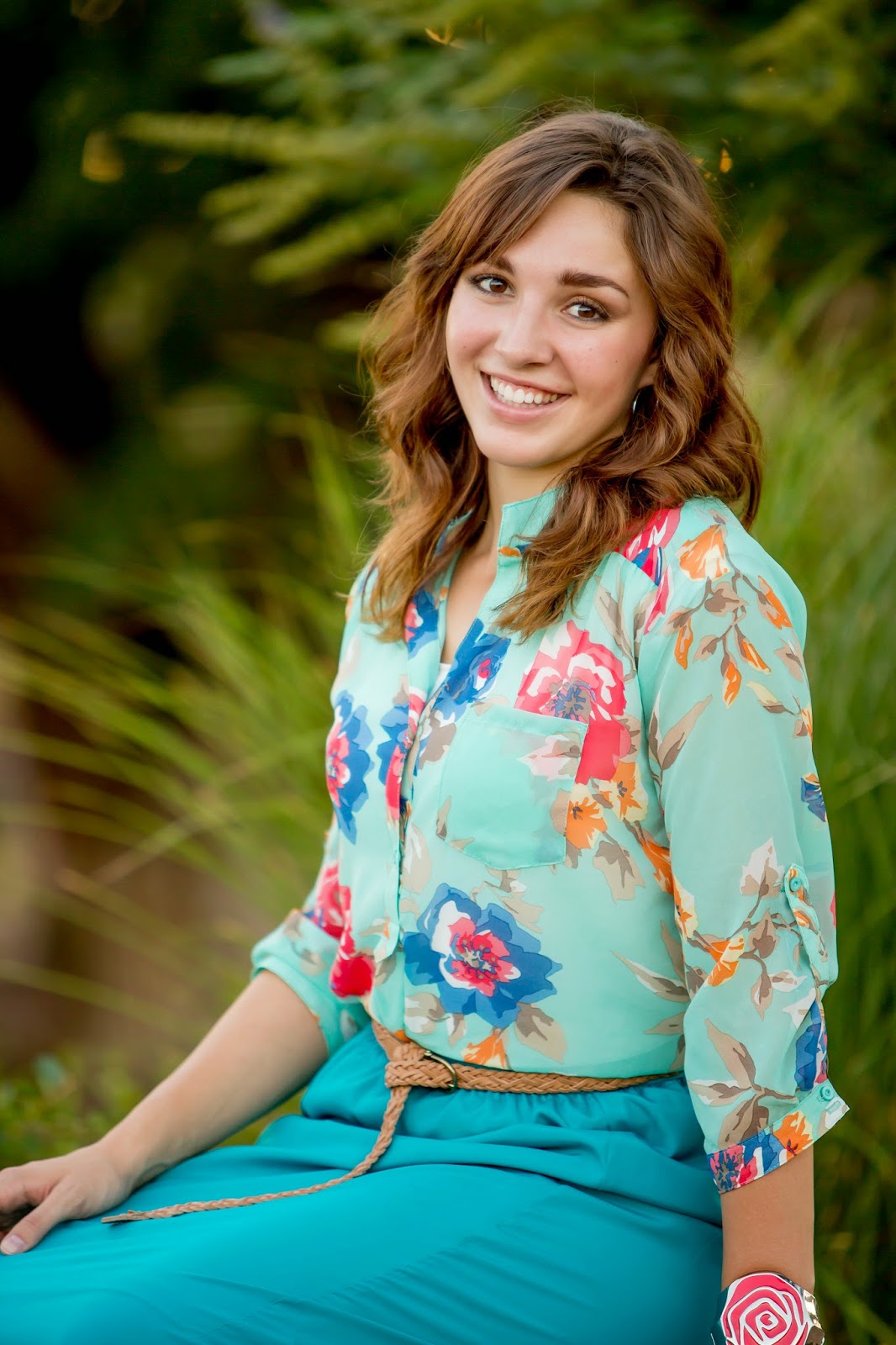 Just Get the Holidays Outta Here and On With the Work

Hello! Greetings, from IJmuiden in 2015.

New Years here is crazy. Us missionaries had to stay inside our apartment from 4pm on. Fireworks. They are everywhere, they are big, and they are scary. But also really cool. So that was interesting. We bought earplugs so we could actually sleep on New Years Eve. One of our better ideas yet.

We ate with dear Sister Sunrise, a lovely funny little Thai woman, on New Years day. She was so excited to make us Thai food, because Elder Shaw told her that he grew up on Thai food and loves it. So the rest of us got to experience the fiery sensations of sticky rice and Thai salad for an entire evening. You eat it with your fingers, and oh snap, is it spicy. Haha missionary eating adventures.

I'm actually glad the holidays are over so that missionary work can be normal again!
Speaking of which, I don't know precisely what it seems that I do out here, but I'm concerned the perception may be slightly skewed. This isn't The District, and it's not The Best Two Years, and it's not a stateside mission or a South American mission. It is Europe, and it is entirely different from any other mission in ways that I never expected. We were watching a bit of The District this week, and I was looking at those missionaries in total awe. It's nothing like my mission haha! We don't even look like that! They make sister missionaries seem so perfect and put together, and the elders seem so solemn and mature. Not so in Nederland! Our hair is Always windblown and our cheeks are red and we often look 20 pounds overweight with all our layers. We knock lots and lots of doors because we don't have investigators, and sometimes I don't even get halfway through my sentence before the door shuts. We work with Elders frequently, and our relationsips with each other are fun and friendly. We are still young kids, and sometimes it is very evident in our behavior, and many of us are often ridiculously immature. Our mission is somewhat chill, compared to stateside, but it's because we are obedient missionaries and our mission hasn't had many problems with it's missionaries. We spend a crazy amount of time travelling, whether on bikes or buses or trains, because there just isn't enough work in one concentrated area. Teaching in another language just isn't the same as teaching in English, and lessons are often quite scattered and incontinuous.

But, this is my mission. And I love it. Each mission has it's struggles and unique trials that it puts missionaries through, but they are all amazing. I guess I just don't want everyone thinking that I'm the perfectly put together, pretty, peppy sister missionary that is so often portratyed by other sisters in other missions. I'm really just my normal self, and the work here is pretty slow. But that doesn't make me any less of a missionary or my mission any less of a mission. I may only bring one person to Christ, and that person may be myself, but if I can even accomplish that, then this is worth it. A mission is so worth it.

I am really excited that this is my only full year as a missionary. There are so many things to look forward to, and I have absolutely no idea what is in store for me. It is both terrifying and thrilling. :) I hope you all have solid new year resolutions that the Lord can use to help you become who He wants you to be and to bring you closer to Him. That is Always the most important (as I am beginning to see as one of His missionaries). I love you and am so grateful for your support. It means the world to me.

This was almost like a pep talk to myself...sorry bout that. Go missionary work! 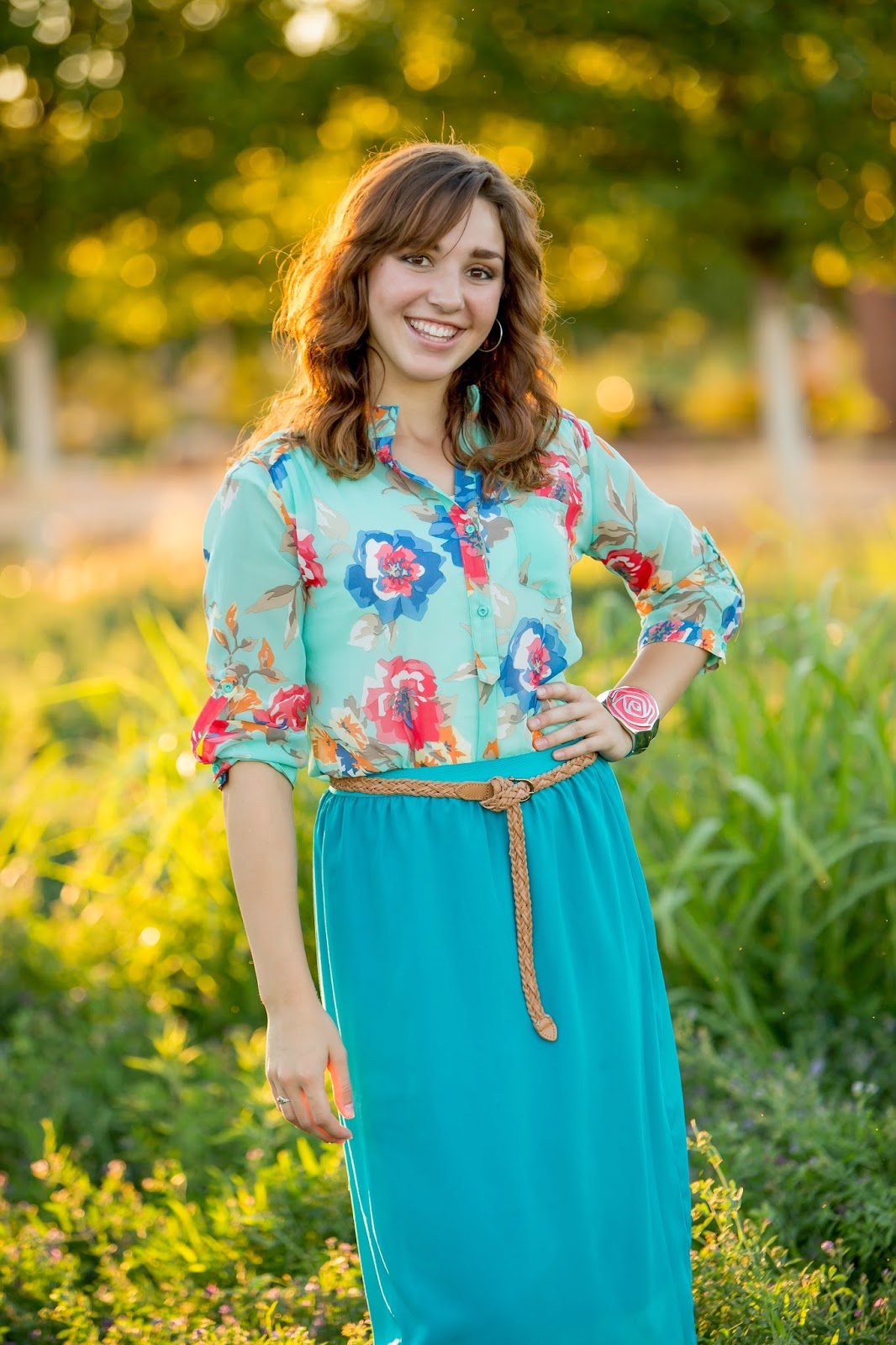